You come down at Ajah park, a frown of confusion on your face, this isn't one of the bus stops your father had given you directions from. Crossing to the other side with your khaki trousers digging into your sides, you find yourself in front the UBA head quarters, a little disoriented. "where do I go from here" you whisper softly and then call your father, he doesn't pick up, he forgot his phone at home but you don't know that at the time. You call your mother, her number is busy "who could she be talking to that's more important than her first child?" You listen to your thoughts and shake your head in amazement at the way your mind works.
Eventually you ask a friendly security guard for directions, as you follow the path you realise it's the same place your father had told you about, you silently vow to improve your sense of direction even though you don't even know how to do that. You trudge on towards the building, you can even see it, it's easily the tallest building there. A memory rises from the murky trove that's your memory bank. You had an aunt that worked in Elephant house when it was Credit Lyonnaise bank head quarters, you were fascinated by the name and ask your father the reason for the name. He tells you elephants used to live there and still visit from time to time. You smile at the memory and at your father's penchant for putting colour and spice to the blandness that is everyday life.


You cross the little but very busy intersection that leads to the bank, your heart  pounding from exertion, how you hate crossing roads especially in Lagos. It's almost a phobia, if you had your way you'd never have to cross any road for the rest of your life. The motorbikes are back you note with disgust, flitting the streets of Lagos like driver ants doused with amphetamines. Now you're on the same section of the street as the building, the building doesn't fit the image in your mind's eye. You note with unease the attention you're garnering, your mother insisted you wear the full NYSC regalia to go and open the NYSC account. You wonder if they don't have corpers in their villages, and then you notice him. He's a few metres in front of you and raking every inch of your body with his eyes, his confidence the type only seen in Lagos boys. Smiling to yourself, you give him your famous cold stare and as expected he shrivels before your eyes. That look has felled greater men than this small fry. When you're finally by his side you flash your sweetest and most innocent smile at him, now your mind is roaring with laughter at the confusion and trepidation battling for space on his face.

Finally you're at the bank, 'scanned for ebola' and enter. The branch is rather small, you're not impressed. You hear the clang of your jungle boots striking the marble tiles, again you groan at the NYSC ensemble and it's capacity to attract attention. You square up your shoulders and adopt the loose limbed stride you'd love to adopt permanently but isn't "ladylike". Finally you're upstairs and you're directed to the account opening officer.

You're startled at the young man who you're directed to, he looks like Akachi! Akachi was an engineering masters student when you were in the university, his voice always reminded you of Barry White- smoky and seductive. You both bonded over your mutual love for Phil Collins and of taking long walks through the grass fields of uniben  You wonder where he is now and realise you haven't heard from him this year and you don't have his number on your new phone. The twinge of loss you feel makes you feel guilty, he was a good friend. Unfortunately the young man has a rather ordinary voice, he gives you the forms and you proceed with filling. Shuddering at the memory of all the forms you had to fill in NYSC camp, you decide you have to make plenty money, after all no one would ask Dangote to fill any nonsense form.

As you fill the form, you listen to the female staff gossip about money and make up. You wonder why they always complain about their jobs when they come to work to gossip. Suddenly you remember your ex pseudo boyfriend that works in a new generation bank. You'd even dreamt of him the night before, struggling to remember the dream proved to be as fruitless as holding smoke. You frown at the memory of that relationship, never again will you go against your instincts no matter how tempting the options seem. He was an old and treasured friend but somehow you weren't so keen on dating him, eventually you agree to his request. Things didn't work out and he accused you of being too hard, at the thought of hard you remember you have a poem to write about hardness. You shake the thought of him from your mind after all both of you haven't talked in more than two months, you sigh regretfully, you'd loved the little piece of shit.
Done with filling, you ask him why you have to pay two thousand naira for an atm card, he proceeds with his bank spiel. His words settling in a mist over your head, you ask him certain questions and his answers don't impress you. You note that he's not capable of independent thinking, you make up his life history in your mind- a first class graduate from a federal university, most probably OAU or UI, his cramming skills would be tremendously impressive. His sense of humour is rather undeveloped, he fails to smile at your attempts to put him at ease with your teasing. He looks uncomfortable even, suddenly a thought flashes. He thinks you're flirting, now you laugh out loud. He's unmarried as his ringless fingers testify but there's no way in hell you'd be attracted to a man who couldn't laugh. Done with the chore, you start heading for the door, he calls you back because you took his pen. You return the pen and turn to leave, "you forgot your keys" he calls out, now he's smiling. "Substitution reaction" you tell him, he explodes with laughter. So he can laugh! You feel a little victorious even though you have no reason to.

As you leave the bank you check your phone and find two missed calls from your mother, you don't return the call. When she comes home later that afternoon, she asks you why you called her, you tell her of your confusion. She rolls her eyes "this my daughter sef, so that's why you called me" she says almost derisively. You find that you're rather close to the marina and walk down to watch the water. Five minutes later you leave for home. You go to the Samsung office first to get your phone and tablet repaired, the story of your experience there would be too long to recount here. You board a bus that would take you halfway home and walk the rest of the way.

You decide to follow the shorter but flood prone route to your house which would save you at least ten minutes. Soon you get to a big pool of water at least three inches thick, you're stumped. Your house is only a two minute walk from here, turning back would mean walking for the next fifteen minutes and the sun's heat was at its zenith. You decide to wade through the water, your jungle boots should withstand the assault. Somehow you manage to cross with only the heel of your boots, the orange top doesn't even get wet. You're finally glad you listened to your mother and wore the uniform.

You remember the first time your mother saw you in the uniform, "I've produced a corper" she gushed with pride lacing her voice. She takes pictures of you and shares them on Facebook. As you remember her joy, the truth dawns on you. You are not ordinary, you're the answer to anguished prayers, the fulfilment of whispered wishes, the manifestation of long held fantasies, the substance of wild dreams. You are all the hues of awesome, all the shades of amazing
And your smile carries you home. 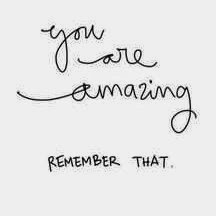 Email ThisBlogThis!Share to TwitterShare to FacebookShare to Pinterest
Labels: nonfiction